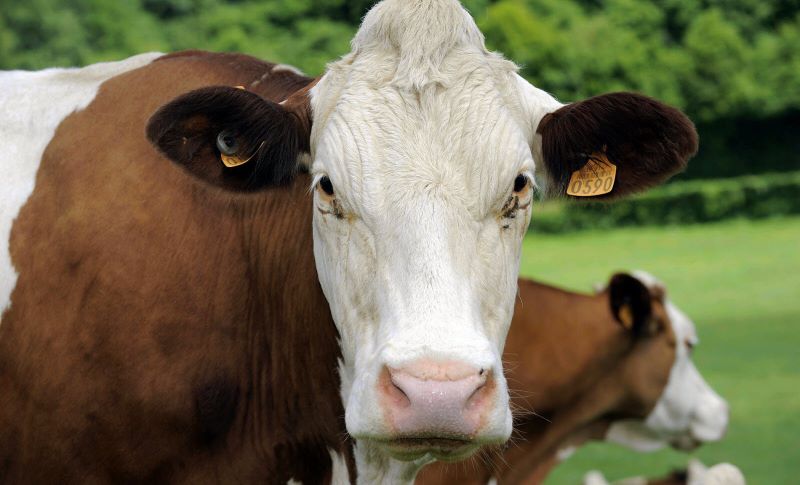 Short answer: The majority of cows are born naturally with horns. To facilitate the day-to-day conduct of their herd and avoid injury, herders practice dehorning or raising cattle without horns by genetic manipulation. That’s why you can come across some hornless cows.

Since the period when the use of horn yoke was common in France for animal traction purposes, the massive arrival of tractors in the countryside between 1950 and 1960 has rendered the tool obsolete.

In the 1970s and 1980s, the arrival of new free stalls (closed park where cattle are confined) and cornadis (barriers where cows’ heads pass to access trough) complicated the movement of animals, the risk of accidents were frequent: jostling, injuries including scorching. Even today, the handling of cows, calving, or the distribution of hay in winter remains risky for the animals as well as for the breeders who handle them.

As horrible as it may seem, the practice of dehorning became indispensable to limit these accidents. The first technique used in the 1970s and 1980s was the sectioning of horns by steel wire. The blood vessels that irrigate the horn when severed are sclerotic, and the frontal sinus is protected by a buffer.

Today, this practice is supervised and widely practiced in cows but is no less criticized. In France, dehorning (“ebutting” for a very young calf) without anesthesia is allowed until the 4th week of a calf’s life and French regulations do not impose anything on breeders, just like the Council of Europe. In limousin, a breeding ground par excellence, dehorning is practiced by iron burning (with temperatures of up to 600 degrees Celsius). The calf would feel pain 1 to 2 days after the anesthetic effect disappeared and the shape of the skull would be altered (higher and more bulging frontal bone). It is a stressful process for the breeder and traumatic for the cow.

In practical terms, hornless breeding involves introducing a natural gene present in a breed of hornless cattle through absorption crosses with cows with horns. There are several in the world, but the hornless cattle breed that comes back most to the subject of genetic breeding is Angus,native to the counties of Aberdeenshire and Angus in Scotland and which came from the interbreeding of black-dominated breeds without horns during the 16th century.

A large number of large beef-producing countries have long reduced the practice of dehorning in favour of genetic manipulation. Except for France, which is lagging behind in this area and is due to different breeding conditions and a strict conception of the concept of breed. On the other hand, the Anglo-Saxons use, without great constraint, the absorption crosses out of pure commercial opportunism and are not concerned about the morphological changes that result. This is not without a hitch: in August 2019, scientists from the famous US federal agency FDA(“Food and Drug Administration”)discovered that cattle “without horns” had been contaminated by bacterial genes.