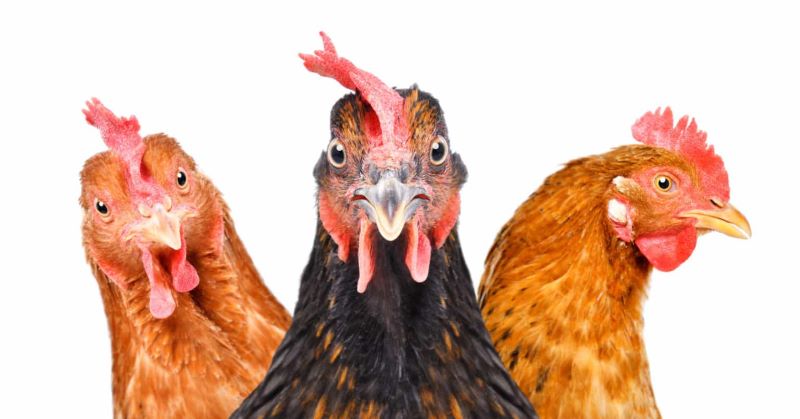 Dear friends, before digging into the history of gallinaceous teeth, let us clarify a very important point which, I am sure, will illuminate your evenings. Do you know what the “egg tooth” ? Located on the upper tip of the chick’s beak, this calcareous protuberance, also called the “diamond”, is used to break the shell of the egg to allow it to come out more easily. YES, chickens have a tooth, at some point in their life, even if the chick loses it soon after. This information badly twists the neck of the French expression “When pigs fly” , a reference to the absurd, to a situation that will certainly never happen … and yet!

Back on topic. The chicks therefore have a tooth that they lose after birth. But why the hell do chickens have no other teeth as adults? And besides, if we come back to the original question, have hens ever had teeth in the past? The answer is YES but it was a long time ago, 66 million years ago, to be more precise. According to one study by Derek Larson , researcher and paleontologist at the Royal BC Museum, two species of birds coexisted when the big dinosaurs disappeared from the surface of the earth: those “with beak” and those “with teeth” drawing their origin from the extinct sauropods.

The rest of the story, you know it: the first species has supplanted the second. The Why does not achieve consensus within the international scientific community. Researchers, like Derek Larson, are advancing today 3 hypotheses, some of which are more plausible than others. Light on each of them:

The seed, responsible for the disappearance of “toothed birds”?

One of the reasons put forward by Derek Larson’s study would be diet related ancestors of birds. During the fall of the meteorite that decimated fauna and flora on the earth 66 million years ago, a gigantic fire embraced the vegetation in its entirety, depriving the maniraptorian dinosaurs (small dinosaurs the size of a bird) with teeth. of food and rapidly precipitating their extinction. On the other hand, the beaked Maniraptorians were able to extract from the earth the only foodstuff still available in abundance for food: the seed. To arrive at this conclusion, the Study researchers collected more than 3,000 fossil teeth different families of Maniraptorians to understand their evolution over more than 18 million years.

Current knowledge of dinosaurs, on the other hand, undermines this hypothesis, which today remains unlikely. Some carnivorous dinosaurs have actually experienced tooth loss with the appearance of a sharp beak. We can also wonder about the feeding of birds at the time which was perhaps not limited to a diet based on seeds. Contrary to what one might think, the hen is omnivorous and needs proteins, minerals and trace elements to eat well. Interesting reading found on magalli.fr on the chicken food if you want to go further.

Weight is the aviator’s enemy

Even if the hens spend their time pecking, the legs aimed at the ground, the specificity of the species is to fly and to fly light to escape more easily from their predators. Thus, the teeth are not of much use for food, which is uninteresting or disabling tends to disappear. It is well known, species are defined by the law of natural selection and loss of dentition is one of them.

Much like the first hypothesis, this one, if you pass the pun on me, is in the wings. It has been contradicted by the discovery of fossils of ancestors of our birds, the best known of which is archeopteryx who had feathers and teeth.

Speed up the egg’s chances of survival

The last hypothesis put forward by researchers to explain the disappearance of teeth in our friends the birds dates from 2018. It is probably the most plausible today.

The hatching times of the eggs of our contemporary birds last from a few days to a few weeks. 66 million years ago, you had to wait 3 to 6 months after laying an egg to see the tip of the newborn’s beak point, an eternity! But why such a difference between now and the Cretaceous era? Has the environmental change of our planet disrupted and accelerated the development time of embryos within the shell? The truth is quite different. At the time, the formation of teeth in the very heart of the shell took 60% of the development time of the embryo. Enough time for predators to kidnap the eggs and make them their meal.

The hypothesis of an acceleration of the hatching of the egg favorable to the survival of the species remains probable even if it is not applicable to all the oviparas. Turtles, for example, do not have teeth but have a long incubation period (over 50 days on average).