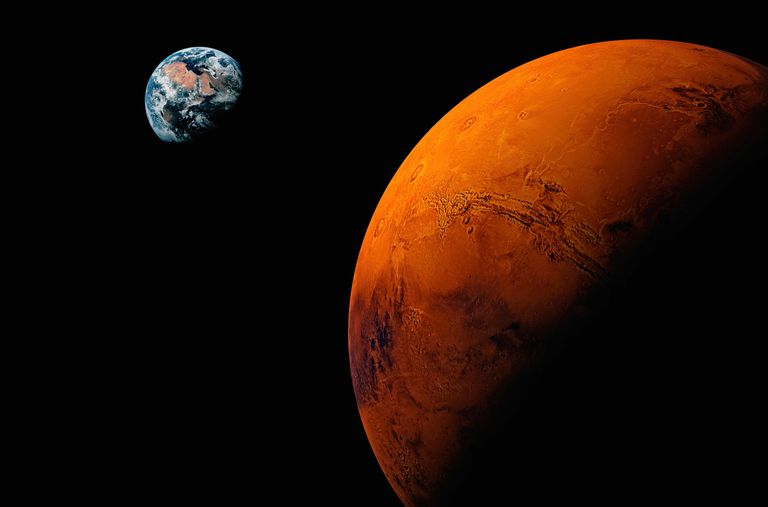 Short answer: The surface of Mars is covered with dust composed mainly of iron oxide, tinged with red.

The red planet has mainly rocky and desert components. It has no ocean, sea or river on the surface that could alter its reddish hue that characterizes it so much. The ancient Greeks and Romans had named the red planet after their God of War, because of this color.

This color dominance is related to dust from desert spaces, composed mainly of iron oxide. Iron oxide, commonly known as rust, is a chemical element resulting from the encounter between oxygen and iron. On Earth, iron oxides are present in abundance in rocks and soils.

Colour varying from season to season

This red colour varies from a pink to a brown hue. These color differences are related to the seasons and the amount of dust present in the atmosphere.

In winter, temperatures can drop to -140 degrees at the poles. Carbon dioxide, most of which is present in the atmosphere, freezes at the poles and the fine red dust attaches to it and falls back to the ground. As a result, the atmosphere becomes clearer and the color cast turns pink.

In summer, on the other hand, dust remains suspended, swept by surface winds that have a very changeable direction and force. Visually, more or less dark areas form, depending on the volume of suspended dust. Color variations can sometimes be impressive during large windstorms that last for weeks or even months. It is then impossible to see the surface of Mars, hidden by large piles of dust. Nasa’s Mariner 9 mission paid the price in 1971 when the orbiting probe was unable to observe the red planet’s surface for weeks.

Four billion years ago, Mars was still a blue planet, like Earth. The sun’s rays and propelled particles would have ended up destroying its atmosphere and the magnetic shield that surrounded it. At least that’s the theory put forward by NASA and an international team initiating the launch of the MAVEN spacecraft,which has been orbiting Mars since 2013.