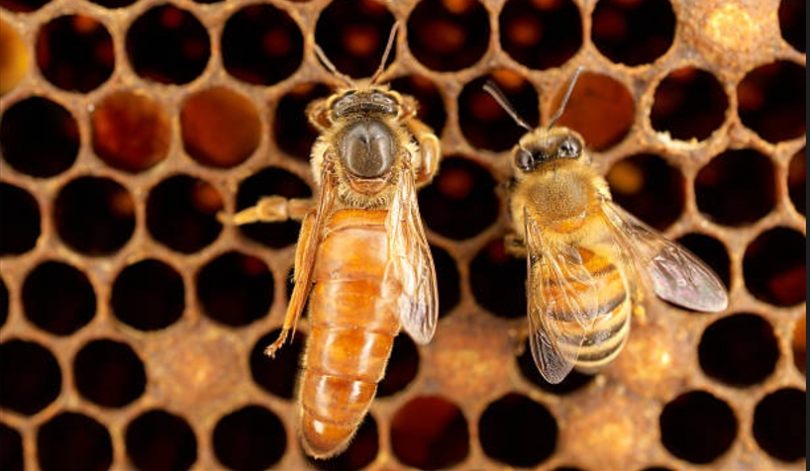 Do you know how to recognize a queen bee? If not, don’t worry, we’re here to help! In this article, we will discuss the physical characteristics of a queen bee and explain how to identify it

How does a queen bee become a queen?

The queen bee is the matriarch of a bee colony. They are produced by specialized cells in the hive and have a lifespan of 3 to 5 years. There are several steps to becoming a queen bee

First of all, it is important to understand that not just any bee can become a queen. There are specific types of bees that are bred to be queens. Secondly, a queen needs to have the right temperature and humidity in the hive to thrive and have an abundant supply of food and water. It is important to monitor her regularly to make sure she is healthy and happy. At the time of mating, the a candidate drone must be of “high standing” to ensure that the queen produces strong and healthy offspring

A difference in size from other bees

One of the easiest ways to identify a queen bee is by her size. Queens are significantly larger than workers and drones.

The size of the queen would be determined by her diet; she would eat more royal jelly than any other bee in the hive, which would help her to grow larger than the workers. This hypothesis would, however, have some doubts today according to this article from Wired.

See also the difference between a bee and a wasp

The queen also has a particular role in the hive: she is the only reproductive female capable of mating. Queens usually mate with several drones during their lifetime and store sperm in a special organ called the spermatheca. This allows her to lay eggs throughout her life, which is essential for the survival of the colony.

During her lifetime, the queen lays millions of eggs. In fact, she can lay up to 2,000 eggs a day! This is possible because the queen has a very high metabolism and an efficient reproductive system.

One last thing, if you are ever faced with a hive and desperately looking for the queen bee, be aware that the queen bee hates light and he will be more easily seen on the side of a rush frame, facing the dark